This week saw a life-changing addition to the Falklands adventure. No, Han isn’t here yet; I got a car! In the UK, you go out or online, look for a car and purchase something that looks like what you want, isn’t too expensive to insure and perhaps has under 100,000 miles on it. Here, you wait until someone tells you about someone leaving or getting rid of a car in your price range, it’ll be a 4×4, it’ll have a cracked windscreen, it won’t matter all that much what it is and you’ll buy it. As a result, I ended up with my car! 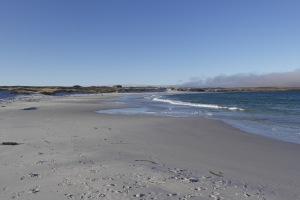 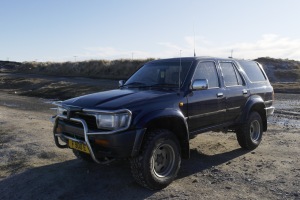 The new wheels, in their natural environment

It is a new experience driving here, for several reasons: every now and then the road just runs out and turns into gravel, everyone waves at everyone every time you pass them which takes an unusual amount of concentration to not forget to do and, as many of the children drive 4x4s very well out here, your driving ability is constantly scrutinised (which isn’t all that much fun for someone not used to driving 3 litre turbo engines in a giant 4×4). Still, a car makes all the difference here and you’d struggle to stay sane without one. The ability to finish work and drive ten minutes up the road to Surf Bay or Gypsy Cove or out to the Lady Liz and walk along the beach, perhaps cheering yourself up watching some penguins attempting to walk is enough to keep anyone here.

One of the first things I did when I was looking up about the Falklands was to see what opportunities there were for outdoor sports, I was hoping to see some whitewater to justify shipping my kayaking gear down and some decent mountains/peaks to get my fix of scrambling (like climbing, but less technical and not generally roped up). It looked like there would be no whitewater so my kayaking gear is still at home and it looked like the peaks were gentle, rolling hills so no scrambling/climbing to be had either. Thankfully, I was wrong on the latter! As the weather forecast for the weekend was clear, sunny and only a gentle breeze we eyed up Mount Tumbledown for Saturday morning. Tumbledown lies just outside Stanley and gained notoriety as the last peak to captured before the Argentine surrender. It was a hard won summit, as the attacking Scots Guards had recently been on ceremonial duty at Buckingham Palace so had something to prove in terms of their battle-readiness and the Argentine defenders were the crack Marines, not the mostly-conscript defenders of other peaks. Today, the perfectly circular ponds in the peat surface leave stark reminders of the mortar and shell rounds that would have terrified so many people and the striations and inlets of rock make you wonder how on earth an army considered attacking this place, and at night too. It is perhaps telling that the British knew how confusing this mass of rocks could be so decided to attack without wearing helmets, to reduce the chances of anyone shooting a friendly silhouette rather than a helmeted Argentine in the darkness and confusion. Whilst the Scots Guards probably cursed it, I am at least thankful for Tumbledown for providing me with a good bit of scrambling for the summit and many more routes to be discovered. Perhaps the Falklands’ first scrambling guidebook will be on the cards some day. It is a stunningly beautiful place on a clear day like yesterday (so clear, in fact, that I’ve been left a bit rosy-faced thanks to the lack of o-zone layer here and the increased UV that accompanies it). The notable landmark on Tumbledown are the remnants of the Argentine soup kitchen trailers, that occupy a sheltered hollow half way up the South side. There is little escaping the effects of ’82 here, even in the middle of what looks to be wilderness.

Beyond Stanley, it’s a barren but beautiful place as far as the eye can see

The view back to Stanley from the summit of Tumbledown. A very different sentiment for me than for others who reached this point.

The Argentine soup kitchen. If trailers could talk…