It’s been a long time coming but it’s time I added my next post to this. While I’ve been trying to sort out work, I volunteered my services to both SAERI and Falklands Conservation. Fortunately for me, I headed off to Saunders Island with Conservation (and without Bailey as he had work) to help with thistle eradication (of the Scottish thistle). The weekend started off nervously as the mist had closed in for the small FIGAS flight and our pilot solved this problem by

simply flying low enough to follow a river North between two peaks, with the plane nearly touching the sides and we were able to picture a James Bond scene featuring our very selves.

We would be spending the weekend staying in some self-catering at the famous ‘Neck’ – a beauty spot between two peaks on Saunders Island, an hour from the landing strip at the settlement. The weekend was going to be spent outdoors so it could go one of two ways, depending on the weather. As it was, we were blessed with stunning sun and barely a breeze so sunburn was the order of the day (it happens quite a bit here with the hole in the o-zone layer).

We started off our trip by heading to the very first (British) settlement. Bailey informs me that the French were in fact the first to settle the Islands at Port Louis, some 6 months before the British on Saunders Island. The two communities co-existed for over a year by not realising that the other was there. Following that, the British were ejected but later reclaimed the Islands, obviously. There are still ruins of the buildings present and I irritated Bailey by going to see them all.

From the Neck we walked about 25 miles on the two days, carrying hoes to remove any thistles we came across and GPS marking them for future reference. It seems primitive but it’s also the best way to remove them out here. The thistles here are an invasive species and can be over 1m tall. We bashed 875 thistles in all over the two days. We were lucky enough that the majority of the thistles were along the coastline and on the Saturday there was no wind with endless blue skies. Keeping an eye on the horizon while thistle bashing we were hunting for whales. We were lucky enough to hear a blow, which then led us to see 4-5 fin whales (we think) playing in the water. 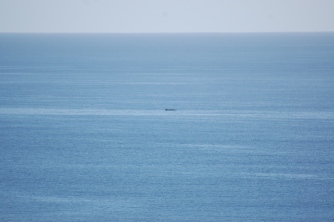 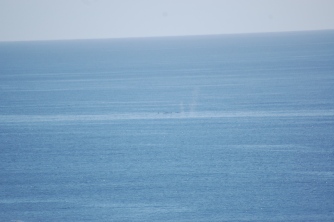 After very long days of walking we had the opportunity to go and spend some time with the wildlife that surrounds the Neck (which includes all 5 species of penguin here in a colony of over 10,000, a dashing of elephant seals and the black-browed albatross; my first encounter). We saw two beautiful sunsets with glowing red skies, but I also got up to brave the early morning and saw sun rise on Saturday at 4:30am. 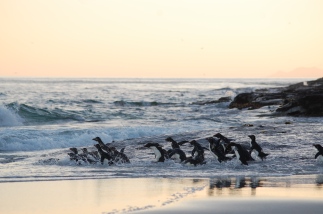 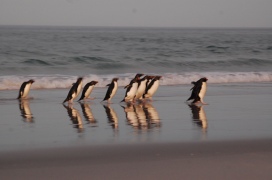 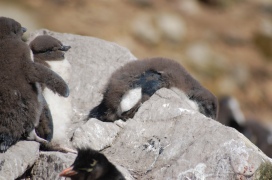 Too hot for Rocky chicks

Ross getting one of the big ones

Me and Emma braving the sun 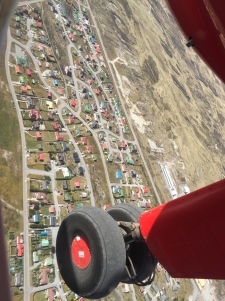 Our house with a mysteriously empty drive 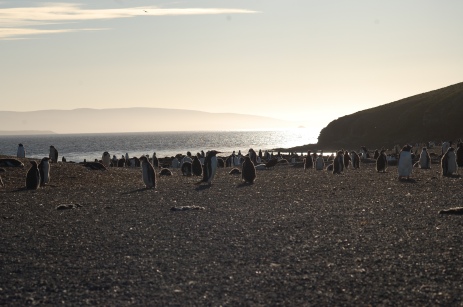 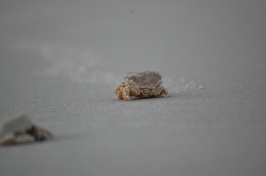 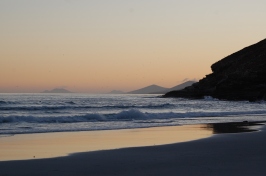 View from the plane on route to Saunders 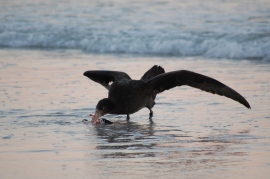 One thing that was new to us was that, where we stayed at the Neck, we counted 27 striated caracaras (also known as Johnny rooks). They were all sitting around the hut, waiting for leftovers from our meals and for us to use the taps so they could drink the run-off in the gutter outside. We’ve since learned that there is a packing order (no pun intended) in their groups and that they gain more yellow feathers on their heads as they age.

the hut with visitors

When we walked to the other end of the Island on our thistle adventure we went to Elephant Point. Far from being home to elephants, but very much home to the elephant seals. Up until now we’d only seen young pups and the adults are over 3 times the size of them (sometimes growing up to 4 tonnes). They are always so chilled out and docile that elephant sealfies were easy: 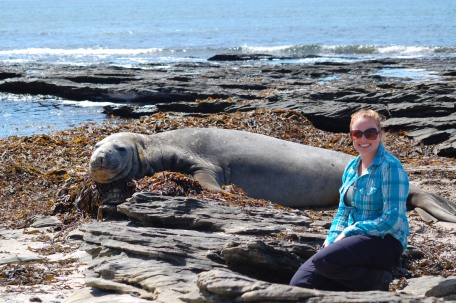 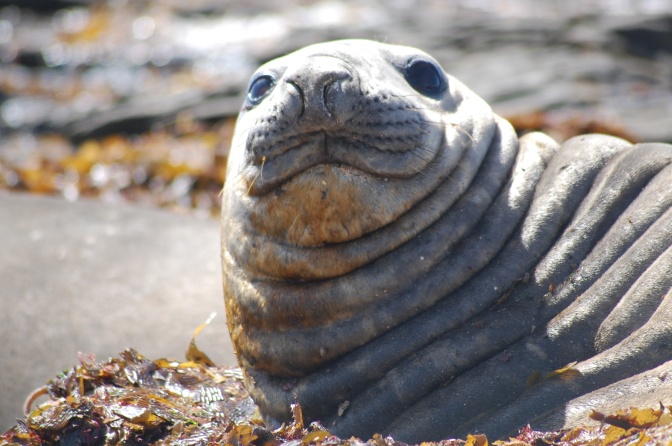 The other new experience for me was, of course, the albatross colony. The albatross mate for life and are incredibly affectionate animals, spending hours grooming each other. This might explain why they are so white despite their nests being surprisingly muddy. They have the most beautiful markings and are known for their smokey eye, that every girl tries to achieve for a night out:

Taking flight, with a run-up 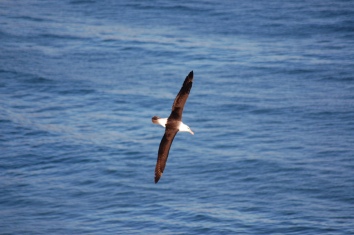 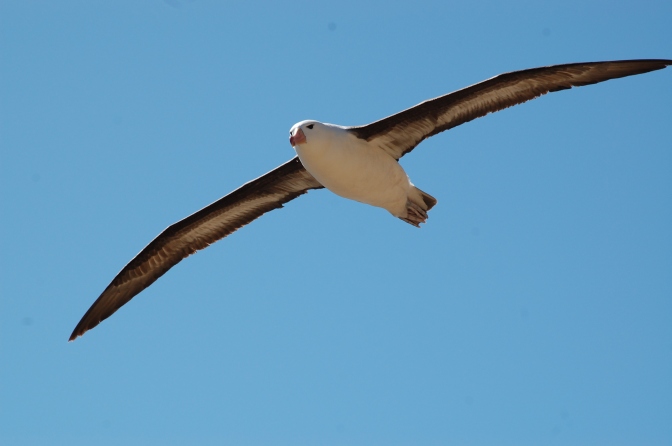 We were lucky enough to have Jake from the community satellite TV channel  (FITV) along with us so here’s his video report on the weekend (I star at 1.19):