We’ve dropped our number of weekly/monthly adventures away and out of Stanley to the minimum lately for the aforementioned reasons, but that’s not to say that the novelties of life here cease. We had been due to go away to the North Western edge of East Falkland, to Port San Carlos/Race Point and the  intriguing sights to be found up there but a snowfall made the prospect of the drive up there, at night on the clay roads none too appealing so we were forced to give it a miss.

Fortunately, the Islands taketh away and the Islands giveth. When we’re bored or we want some time outdoors we have some regular areas around Stanley that we visit: Mount Tumbledown to the West of Stanley for hill walking with some 82 remnants, Surf Bay to the South East of Stanley for a beach walk with a good chance of the Commersons dolphins:

and otherwise Cape Pembroke to the East of Stanley for its lighthouse and the odd chance  of seals.

We opted for Cape Pembroke for a short (c.15 minutes) drive and a walk around the Cape on Saturday and we were stopped in our tracks by the sight of a distinctive ‘blow’ from the road out. As it transpires, Southern Right Whales are migrating and stopped by the Islands for a short spell. Whilst we’ve seen whales before, we hadn’t expected to see them so close from the road! (On a map, these would be between the Westernmost Tussac Island) and the North of Cape Pembroke). 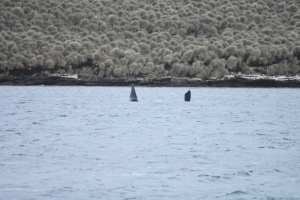 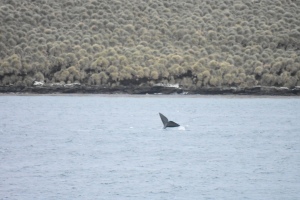 These giants were stunning to watch until sundown but most impressive were both the noises and this particular sequence of one launching out of the water to come crashing back down:

We’ve taken on board a lot of information about the wildlife, geology, culture, politics, history and all kinds of aspects of the Islands. I don’t see why this memorable encounter should be an exception to that pattern:

Here’s to seeing what else Winter has to throw at us before our return to the UK for a short stint in August. I guess it should be noted that August was meant to be the end of our contract and time here. It’s flown by and there’s a good amount left to see and do. Lucky we’ve extended our contract…